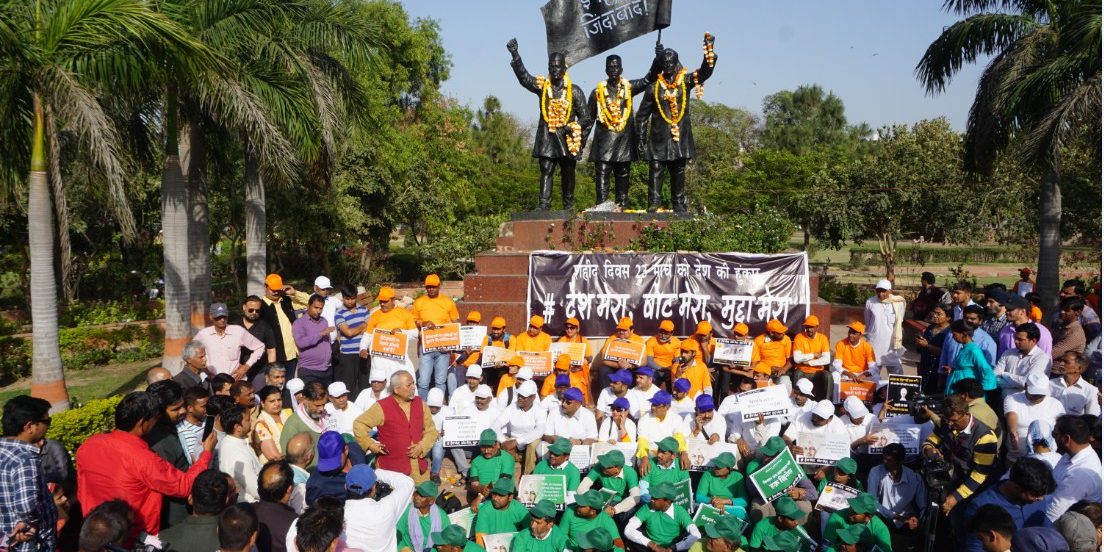 Campaign aimed at bringing into electoral focus issues like unemployment, agricultural crisis, failing economy, destruction of democratic institutions and those of marginalised sections

To bring the real issues of people into electoral focus, a nation-wide campaign ‘Desh Mera, Vote Mera, Mudda Mera’ was launched on Shaheed Diwas 23rd March. The campaign began with programs held at hundreds of the places across the country with the collective efforts of civil society organisations and people’s movements. In Delhi the campaign was held at Shaheedi Park, ITO. Citizens who joined the campaign in Delhi pledged to make all political parties accountable in the upcoming loksabha elections and formed a tri-colour in front of the statue of Bhagat Singh, Rajguru and Sukhdev. The campaign aims at not letting the elections be hijacked or swayed away from real issues that affect the people of this country. The campaign, launched on the martyrdom day of Shaheed Bhagat Singh aims at bringing issues such as unemployment, agricultural crisis, issues of the marginalised sections of society, failing economy, destruction of democratic institutions and the issues of marginalised sections of the society to the centre of political focus in the upcoming Lok Sabha elections.

Taking part in the campaign, Nikhil De expressed the hope that this action marks the beginning of return of his election to basic issues.

More important than who wins the upcoming elections, it is important that the elections be fought on real issues of the people. But in the last one month, questions of unemployment, agricultural distress, environmental degradation, riding corruption, social disharmony and destruction of institutions have been brushed under the carpet and overtaken by war rhetoric. The narrative of our Lok Sabha elections is being dictated by actors in Pakistan. Rather than presenting a score card of its five-year performance, Modi government is hiding behind the pretence of national security. While the ruling party is using people’s emotions to generate war rhetoric, the “Desh Mera, Vote Mera, Mudda Mera” campaign aims at holding the government accountable for its term.

In Jaipur, Professor Apoorvanand warned against the attempts during this election campaign to distract the people from real issue in the name of nationalism.

March 23rd is a significant day in the history of India. In addition to the martyrdom of Bhagat Singh, Rajguru and Sukhdev, today is also the birth anniversary of Ram Manohar Lohia and also marks the end of the Emergency. It is on this day of historic significance, that the campaign “Desh Mera Vote Mera, Mudda Mera has been launched all across the country.

Delivering a lecture at Gwalior on this occasion, Medha Patkar remembered the socialist legacy of Rammanohar Lohia, whose birthday falls on 23rd March.

Some of the major civil society organisation and people’s movements that took part in the campaign are:

The program concluded with a large adivasi festival in Nandurbar district of Maharashtra.

In these delicate times, Modi govt should ensure bonhomie in Indo-Nepal relationship
May 25, 2020
Tweets by _SwarajIndia
Go to Top