‘Vivekananda Youth Summit’ to be held at Delhi University on 12 July, 2018

‘Vivekananda Youth Summit’ to be held at Delhi University on 12 July, 2018 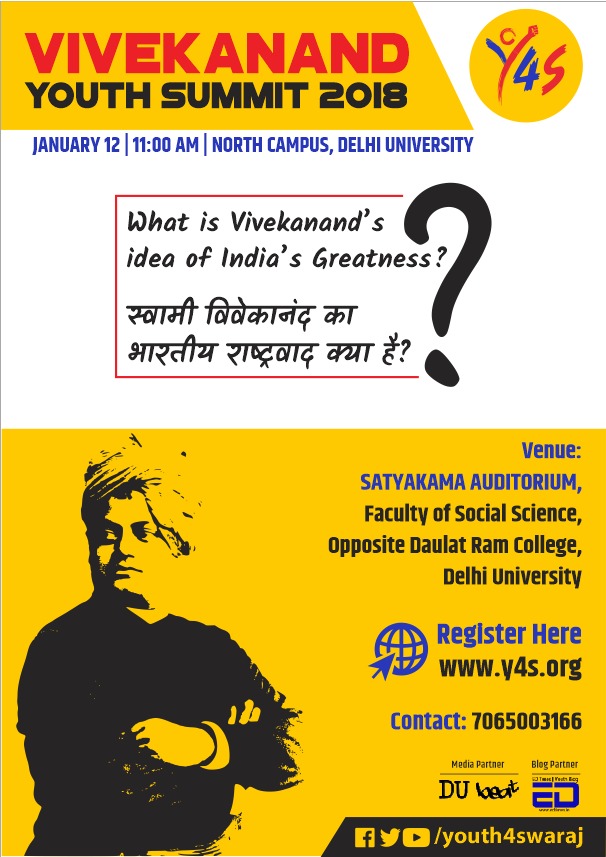 A future plan based on the ideals of Vivekananda that will act as the guiding path for the country’s youth to be formed.

The student-youth wing of Swaraj India, Y4S (Youth4Swaraj), is organising ‘Vivekananda Youth Summit 2018’ on the 12th of January (11 am). The event is being organised on the National Youth day which coincides with the birth anniversary of Swami Vivekananda.

Along with students, youth and teachers, Swaraj India President Yogendra Yadav will also attend the event and address the gathering.

At a time when hate & violence in the name of caste, creed, race & religion is at peak, at a time when the notion of nationalism is being distorted, and the very idea of India is under threat, Swami Vivekanand and his thoughts have become more relevant than it ever was. A section of political class, in order to further its own political agenda, today wants to reduce Vivekanand to just an image of a ‘saffron robe wearing hindu saint’ and not adhere to his noble teachings & thoughts.

The objective of ‘Vivekananda Youth Summit 2018’ is to have a dialogue to find the way ahead and a guiding path for the youth of this country. This is an attempt to put an and to restricting Vivekananda to mere floral tributes and start embodying what he preached & practiced.