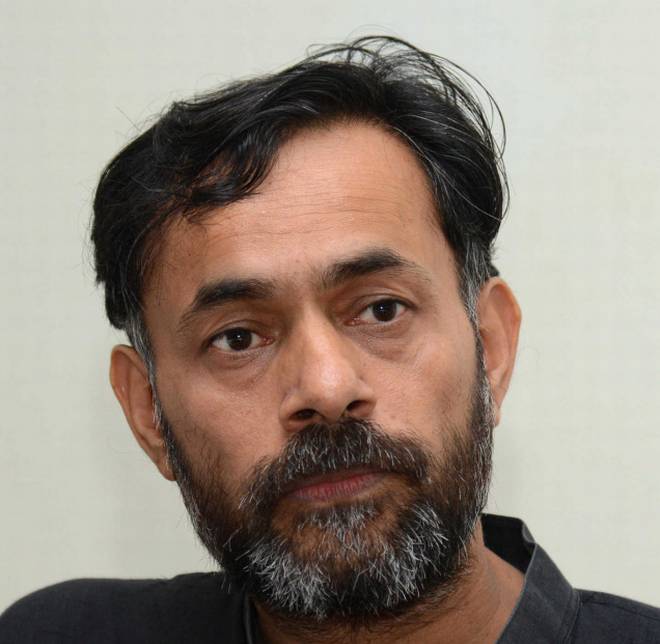 As a rule, I do not use this column to discuss my organisation and its politics. Last week, however, a decision by the Delhi unit of Swaraj India concerning the NOTA button this Lok Sabha election invited a lot of attention and raised a question of wider significance about the use of the None of the Above option.

Frankly, I was taken aback by this debate. As far as I was concerned, this was a very limited and relatively minor decision by our party. Our major decision in this election was not to contest any seat ourselves, but to channel our limited energy on keeping the focus of this Lok Sabha election on substantial issues like farm distress and unemployment. That still left the secondary question about who to support this election. Here again, our main decision was quite clear: we saw the BJP as leading an assault on the very idea of India so it had to be defeated. At the same time, we could not see the opposition-led mahagathbandhan as an alternative in any meaningful sense.

So, instead of giving a call for supporting whoever could defeat the BJP, we focused our energies on identifying and supporting alternatives. We extended support to political startups with a potential (e.g. Makkal Nidhi Maiyam, Jan Andolan Party or Hamro Sikkim Party) or candidates who represented seeds of alternative politics (e.g. Prakash Raj, Dharamvir Gandhi and Kanhaiya Kumar). In all, we supported about 50 candidates and I have campaigned across 12 states and UTs for them.

What do we do in those states or constituencies where we could not identify any such alternative? Delhi was one such place. Our state unit was open to the use of NOTA. To be more precise, we decided to launch a campaign asking some hard questions to the three big political parties in Delhi – the BJP, the AAP and the Congress. Our call was that if none of the parties or their candidates answer these questions satisfactorily, the voters should feel free to exercise NOTA during the polls. For us, the NOTA option in this instance was ‘No Till An Alternative’, a limited and last resort option.

This decision invited strong reactions: surprise, dismay and outright condemnation. The critics included some of our well-wishers and fellow travellers. We held another round of deliberations within the party and decided to issue a statement clarifying the limited context and the rational for this decision. The debate has continuous thereafter, not so much because of the likely impact of our decision, but because it brought to the fore the dilemma faced by many citizens in this election.

There are two sets of questions about the use of NOTA: One, is it in principle a legitimate political instrument to be used by a political party? Two, is it an effective way of using one’s vote especially in an election like this one?

Many critics object to NOTA on principled grounds. They find the very idea of NOTA very apolitical, if not elitist and undemocratic. For them, it is as good, or as bad, as boycotting elections since this has no real consequence on the election results. Is it not presumptuous to say that the entire range of options given to who us by the political system is unacceptable?

I beg to disagree. NOTA is as far as it can get from a poll boycott. If anything, it takes a higher degree of trust in democracy for someone to go to the polling booth and then press the NOTA button. What its critics forget is that the right to use NOTA is a hard-earned victory of the civil right movements. It was granted by the Supreme Court in response to litigation by the People’s Union for Civil Liberties in 2013. Yes, at the moment NOTA has no impact on the electoral outcome, even if votes cast in favour of NOTA are higher than those for any candidate. It is no doubt a “protest vote”. But the same can be said about our decision, or that of many critics of NOTA, to support candidates who may not be among the top two contenders. NOTA is being used in this election by many social movements, such as the anti-liquor movement in Raichur and the Right to Education movement. Protest vote is a very standard and valuable instrument in democracies used by voters all over the world to give a message to the political establishment.

The second set of questions is more weighty, pressing and delicate: How could you say that this election is about the soul of India and then remain nonpartisan? How can you equate parties like the Congress and the AAP with the BJP? Is this not an indirect way of helping the BJP? Why do you not identify the AAP as an alternative political force? Are you not blinded by your personal experience with the AAP?

There is no contradiction between saying that the BJP presents the biggest challenge to constitutional democracy today and yet we need not support anyone and everyone who can defeat it. It is one thing to wish, in moments of sheer desperation, that anyone other than BJP should win. One could even wish to help the clueless opposition in the face of an organised onslaught. Many of us must have gone through this feeling. But it is quite another thing to actually campaign in favour of any party or candidate that can defeat the BJP. Such political desperation can actually weaken a principled politics for the defence of the soul of our republic. The harsh truth is that none of the leading opposition parties presents us with any meaningful alternative to the BJP: they do not have a big vision, a coherent road-map, a smart strategy or a credible face. Recognising that there is no alternative is the first step towards building one.

As for those who believe that the AAP represents a force of alternative politics, let me just say that there are limits to stretching one’s credulity. We in Swaraj India have tried not to allow our personal experience with the party affect our political judgement. In fact, we extended support and best wishes to the AAP in Goa and Karnataka assembly elections where they did put up good candidates. I have openly expressed my admiration for Atishi Marlena’s work and have defended Arvind Kejriwal against ridiculous charges by Kapil Mishra. But to those who think Kejriwal is an ally in the “anti-fascist” struggle, I would only say this much: you do not know him.

Principles apart, does NOTA not help the BJP in this all-important election? This is an empirical question. Somehow most critics of NOTA get carried away in assuming the following: that it is a tight race between the BJP and its major opponent, that a NOTA voter is a potential opposition voter and that a shift from opposition to NOTA could, therefore, help the BJP to win. To my mind, these assumptions are not valid. Let us not forget that the BJP is the only party carrying out a campaign against NOTA. Let us wait for election results to verify other assumptions. Meanwhile, let the debate continue.

First published in the ThePrint