Secularism gave up language of religion. Ayodhya bhoomi pujan is a result of that

Secularism gave up language of religion. Ayodhya bhoomi pujan is a result of that 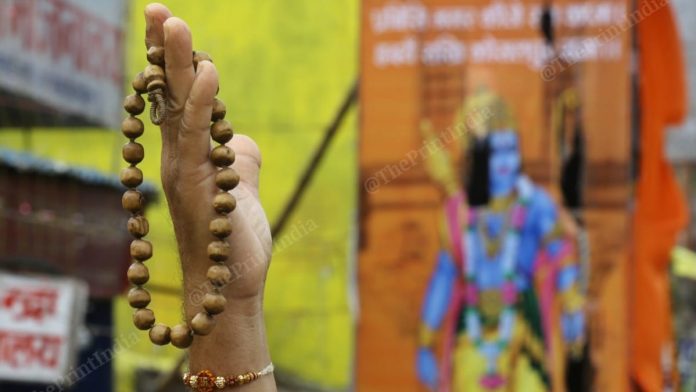 Afuture historian might record 5 August 2020 as the day secularism died in India. She would no doubt mention that the patient was always sick and rather ill for over three decades. She may note many critical dates when wounds that proved fatal were inflicted by the RSS-BJP and their affiliates. But she would also note that the last nail in the coffin of secularism was not put by the BJP.

Today marks the death of secularism, not because there is a bhoomi pujan for a grand Ram Mandir at Ayodhya. The construction of a temple — or gurudwara, a church or a mosque for that matter – should not cause grief, much less death, for a secular State. A magnificent temple, especially for Lord Rama, and that too at Ayodhya, should normally be an occasion for celebration, just as the construction of a pilgrims’ corridor to Guru Nanak’s birthplace. A politician presiding over a religious ceremony is not the best of practice in a secular State, but there is nothing unusual about it in India.

Today marks one year of the scrapping of Article 370 and the dismantling and diminution of Jammu and Kashmir. This must concern secularism. It is hard to overlook that this was the only Muslim majority state of the Indian Union. It is harder to imagine a Hindu majority state being sliced up overnight and the civil liberties of the ordinary citizens as well as top political leaders suspended for a year. At the same time, the regional dimension of the Kashmir issue is more salient than the religious one. The tragedy of Kashmir is more a failure of India’s federalism and our counter-productive notions of national security than a sign of the death of our secularism.

The triumph of majoritarianism

Today, as Prime Minister Narendra Modi and Uttar Pradesh Chief Minister Yogi Adityanath preside over the bhoomi pujan at Ayodhya, the function marks the triumph of majoritarian politics. Yet, the future historian would remember that majoritarian politics began its triumphant journey way back in 1989. If there is something new here, it is the stamp of legality. Unlike 1949 or 1986, this time the deity would make a legal entry, certified by the Supreme Court of India, no less. (She might also note, in passing, that the Supreme Court marked this day by prosecuting an outspoken public interest lawyer for contempt of court). Our future historian would underline the fact that a few months after passing that strange order, the Supreme Court had also refused to stay the Citizenship (Amendment) Act, 2019, which provided for unequal treatment of future citizens on religious grounds.

Today’s ceremony in Ayodhya is not a religious or sacred ritual. It is a purely political one, a ritual of conquest. The ceremony symbolises the fusion of multiple forms of power: State power, the power of the dominant political party, the brute power of the majority community, the power of modern media, and the power of religious authority.  The only thing missing so far was a wholesome participation of opposition parties. The Congress, this time formally led by Gandhi family and duly followed by other leaders, has filled that gap. A feasible version of Hindu Rashtra, compatible with the fiction of a secular Constitution, has been inaugurated.  And the Congress party has hammered the final nail in the coffin of secularism.

The defeat of secularism

Today is the culmination of a long journey. Our future historian would find out that the battle for secularism was not lost in the courts or elections. This was a battle of ideas. Secularism was defeated in the minds of the Indian citizens. The proponents of Hindu Rashtra must not get the credit for their victory. They were just the beneficiaries of the colossal failure of secular politics. Above all, the custodians of secular ideology were responsible for this defeat.

Today, this cultural vacuum has created a condition in which anyone with a tilak and trishul can claim to be a leader of Hindus. This created an ideological space where the idea of secularism could be demonised and attacked. This created a political void where the Congress could shift from supreme indifference to Hindutva to a complete surrender.

Today is the right day to begin a new journey, a journey to rediscover the lost language of religious tolerance, to reconstruct Hinduism, and to reclaim a future for our republic.

(The author is the national president of Swaraj India. Views are personal.)