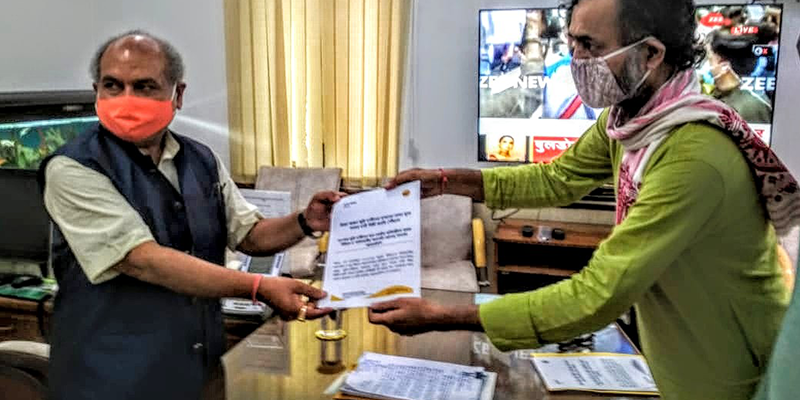 Delhi, 9th September, 2020: Yogendra Yadav, President of Swaraj India and Founder of Jai Kisan Andolan today met Shri Narendra Singh Tomar, Union Minister of Agriculture at Krishi Bhavan in Delhi, raising the demands of maize farmers of India including North Bengal. A three-member Delegation of Swaraj India-Jai Kisan Andolan, led by Shri Yadav submitted a detailed Memorandum of Demands of the maize farmers of the India who have been suffering due to price crash and have been compelled to sell their produce at less than half the mandated MSP of Rs.1760/quintal. The minister admitted that the farmers are facing unprecedented financial crisis due to crash of prices and promised to look into the matter and do the needful to mitigate the situation. The Delegation informed the minister that if no affirmative action is taken within a short period, farmers will be compelled to intensify their struggle and there will be mass protests, which in the time of pandemic, will be very unfortunate.

It is noteworthy that the meeting with the Minister materialised after a long time and several requests. It is also noteworthy that till date 500+ letters have been written by Swaraj India to the Prime Minister, Central Agricultural Minister, Central Agricultural Secretary, Governor, Chief Minister, Agri Minister, Agri Secretary & Food & Supplies Secretary of West Bengal, the 3 MPs and 8 MLAs of Uttar Dinajpur district, West Bengal. In addition, Memorandums have been submitted to the local BDOs and District Magistrate, Uttar Dinajpur. Many meetings at village level have already been held and farmers have spontaneously joined the localised protests to get fair price for their crops.

Yogendra Yadav said: “Today’s meeting is expected to bring some results for the farmers. If the authorities, departments and administration remain neglectful, then there will be mass protests in all the maize producing districts, which will be very unfortunate given the health crisis due to Covid-19 but the farmers are at the end of their tether and no one, from PM to DM, is listening. It may be kept in mind that farmers of Uttar Dinajpur District as well as of the districts of other states are being compelled to sell their maize crop at rates much below Minimum Support Price (MSP).”

The Memorandum of Swaraj India & Jai Kisan on behalf of maize farmers demanded:

(1) Make arrangement for setting up of adequate number of Central Government procurement centres for Maize that are easily accessible by farmers, in all Maize growing districts;
(2) Ensure that the aforesaid purchase centres for Maize are adequately manned and funded to ensure that the entire Maize crop of all farmers is seamlessly procured at MSP at these centres, without causing any bureaucratic hurdles and difficulties for farmers;
(3) Make arrangement of a system so that farmers who have been compelled to sell their Maize crop at rates lower than MSP can lodge their claims for such loss and expeditiously receive compensation from the Central Government;