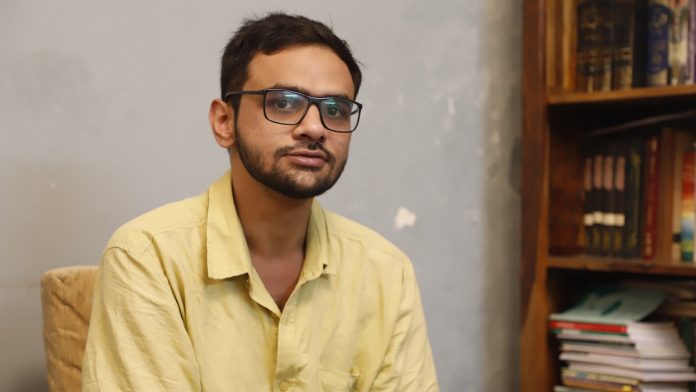 ● This attempt to criminalise a democratic protest has dangerous implications

Swaraj India condemns the arrest of youth leader Umar Khalid who has been booked under the draconian law, UAPA, without any evidence to warrant this.

Umar Khalid has been arrested because he represents the true voice of opposition in this country. By arresting him, the regime has sent a brazen signal to crush dissent in the country. Invoking the draconian anti-terror laws shows that unsure of its own case, Delhi Police wants to ensure that the trial itself becomes the punishment. This comes at the time when those who have on record instigated and threatened violence are roaming free because they are being shielded by the BJP.

His arrest is part of a larger design by Delhi Police to somehow link the anti-CAA protest with the violence in Delhi. The pan-India movement to defend the constitutional values, spread over months, was an embodiment of the spirit of democracy and non-violent. Naming of Swaraj India president Yogendra Yadav and other political leaders and intellectuals in another charge sheet was also a part of the same design.

Sadly, a professional organisation like the Delhi Police is merely following the poor script written by the IT cell of the BJP. On March 2nd, without any investigation or enquiry, BJP IT Cell Chief selectively released a clipped portion of Umar Khalid’s speech and blamed him for the riots. Nine days later, Union Home Minister changed his stand from ‘riots were spontaneous’ to calling them a ‘planned conspiracy’ and named ‘United Against Hate’, the organisation to which Umar Khalid belongs, as responsible for the Delhi riots. This was done without any investigation or enquiry and since then the Delhi Police has been following the same script.

Swaraj India President, Yogendra Yadav said, “Delhi Police’s investigation into the riots is a conspiracy in itself. The way it has handled the investigation into the riots could become another blot of its uniform. In 1984 Delhi Police stood a mute witness to massacre and let the culprits go scot free”. This time police has gone a step further by turning the victims and defenders of peace into the culprits.”

Swaraj India condemns this attack on the right to dissent, on the right to protests against the government of the day and reiterated its support to Umar Khalid and scores of other innocent persons who have been arrested and are being harassed. Swaraj India demands that these ridiculous charges against Umar Khalid and other protesters be dropped forthwith and this sham investigation should be scrapped. We demand that a court monitored investigation must take place into the riots in Delhi.