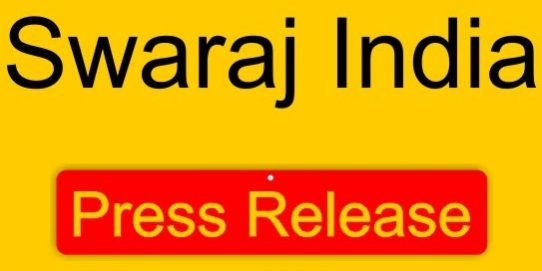 Press Note
8th April, 2019
Swaraj India
Swaraj India terms BJP’s manifesto ‘manifesto of castles in the air’
BJP manifesto fails on both fronts – claims of previous 5 yrs and hope for next 5 yrs!
BJP accepts it does not have the moral authority to speak on jobs
On two main demands of farmers’ movements- remunerative prices & loan waiver, BJP’s manifesto unashamedly silent
Time to undertake ‘deNaMotisation’ of the government responsible for disastrous demonetisation
BJP’s ‘sankalp patra’ possess anything but a ‘sankalp’. The ‘castles in the air’ manifesto that does not speak of any concrete plans should better be termed as ‘shunya patra’. Neither does it act as a score card of the last five years nor does it inspire confidence as a manifesto for the next five.
At a time when the unemployment rate has broken the record of 45 years and a government that had ‘job-creation’ as one of the main poll planks has brought the country a jobloss growth, it isn’t surprising that Narendra Modi, the PM candidate of BJP does not mention ’employment for youth’ at all. This clearly signifies BJP’s acceptance of its loss of moral authority to even speak on the issue of youth employment.
Mr. Modi seems to be learning from his mistakes. Last time he had promised crores of jobs to the youth of the country. Generating crores of jobs being a distant dream, his policies ended up destroying crores of jobs. After bringing jobloss growth to the country and destroying millions of livelihoods, Mr. Modi, and rightly so, has been unable to find the moral courage to even talk about generating jobs and employment.
BJP’s ‘Sankalp Patra’ has made a mockery of the farmers of the country. It maintains a deafening silence on the two main demands that farmers of the country have been consistently making for the last two years – remunerative prices and one-time complete loan waiver. On the question of freeing the farmers from the debt-trap, the manifesto does not have a single word. Not only does the BJP make it clear that it cannot do anything for setting the farmers free from the debt-trap, it has also made clear that it doesn’t even intend to do anything about it. The manifesto is similarly silent on ensuring fair prices to the farmers for their crops, MSP, Swaminathan Commission, as well as government procurement. It merely mentions that the government would attempt to ensure that the markets offer the farmers a fair price for their crops. So essentially BJP has washed its hands off the cause of farmers.
BJP’s silence on these two is more deafening as the main opposition party Congress has made concrete promises to give loan waiver and build a new system to ensure better prices for their crops to farmers. It was being hoped that BJP will promise at least this or something better. But BJP, by their silence on these two questions has made its intentions clear.
Old promises and jumlas have been repeated on the issue of agrarian issues. The promise of making “efforts” to double the farmers’ income by 2022 has been repeated, without informing how much has farmers’ income over the last three years and how will it be increased over the next 3 years. That the Govt has promised to make the PMFBY optional, is a clear admission that it was being implemented forcibly and that farmers were opposed to it. This announcement is about scrapping PMFBY. On the other hand, by saying that 68 irrigation projects will be completed quickly, BJP has accepted that out of the 99 irrigation projects that Modi Government had decided to complete, only 31 have been completed so far.
The manifesto talks about implementing ‘Kisan Samman Nidhi Yojana’ on the remaining 10-15% of the farmers but has no mention of how to remove the biggest drawback of this policy – that it does not include contract farmers or landless farmers as its beneficiry. The manifesto has no plans to bring them within the ambit of this scheme.
BJP has repeated the promise of its 2014 manifesto of giving pension to farmers but without clearly specifying the pension amount or the date on which this pension will be initiated. It’s clear that either BJP will do nothing in this context or the farmers will be asked, just like labourers were, to deposit money in their accounts on a monthly basis as future savings and in future, they will receive some returns and then this will be termed as pension.
Rest, this manifesto has been stuffed with names of government schemes and statistics. Neither have the farmers benefited from them nor they will.
With this manifesto, BJP is giving a clear message “Over the next 5 years, we will treat you in exactly the same manner as we did in the last 5. If you like it, vote for us otherwise we don’t care.” Now, it’s the responsibility of farmers and youth of this country. It’s time to undertake ‘deNaMotisation’ of the government responsible for the disastrous decision of demonetisation.
Category: Press ReleaseBy Swaraj India MediaApril 8, 2019Leave a comment