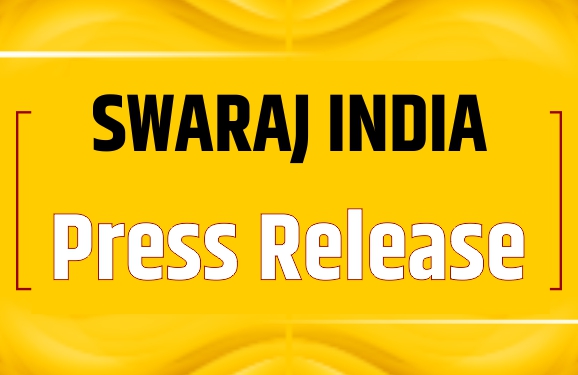 Swaraj India
Press Release
Chandigarh: 27 June 2019
Swaraj India to take part in upcoming Haryana Vidhansabha elections on the path of ‘Politics of truth’
Swaraj India to contest all seats
Swaraj India to give tickets to female candidates in at least one-third of the constituencies and youth candidates in at least one-third.
Swaraj India will negate the politics of Jaat-vs-non-Jat and contest on the lines of “ना पैंतीस-एक, हो छत्तीस एक”
Swaraj India will raise the issues of remunerative prices for crops and complete freedom from debt for farmers, job for unemployed youth, an end to liquor vendors, dignity to labourers and upholding of law and order
Election Commission has alloted “whistle” symbol to Swaraj India
Swaraj India gave a call to join by missed call(8458893011)
Newly formed political party Swaraj India will take part in the upcoming Vidhansabha elections in Haryana in all constituencies. Swaraj India National President Yogendra Yadav made this announcement while addressing the media in a press conference in Chandigarh. He said that today politics in Haryana is either run by those who are in jail or by those who are staring at jail terms. It is under these circumstances, Swaraj India will establish the politics of truth.
Yogendra Yadav said that Swaraj India is here to change the language of the state’s politics.
“While all other parties are contesting to harvest fruits for the next five years, we are contesting to sow seeds for the upcoming five years”, Yogendra Yadav said.
Over the last four years, Swaraj Abhiyan and Swaraj India have been raising the issues of agrarian distress, unemployment and corruption all over the country. As a result of Swaraj India’s consistent public movement, the  procurement of bajra and sarson was enhanced by the government in the state of Haryana.
Instead of a “goshnapatra” with hollow promises and false claims, Swaraj India will issue an “Imanpatra” with concrete policy proposals. The party president also highlighted five main issues around which the party’s campaign will run:
1. Farmers will be assured of at least one and a half times the price of all the input costs along with complete freedom from debt.
2. Educated but unemployed youth will be given a stipend by the government to help them in their search for employment opportunities.
3. Consent of women in a Gram Sabha will be made compulsory to either open or run a liquor shop in the vicinity of that village.
4. Daily-wage labourers engaged in agriculture and other areas will be assured of being paid at least the minimum wages.
5. The deteriorating law and order situation in the state has also found place as one of the top five issues of the party’s campaign.
Criticising both the ruling party and the opposition in the state, Swaraj India state President Rajeev Godara said that a political vaccum has been created in the state. On the one hand, numbers of those who are finding it difficult to find employment opportunities is increasing while as those who are employed are protesting on the streets, farmers aren’t getting the due MSP, and caste divisions & communal hatred have increased in the state. On the other hand, BJP is indulging in politics of obtaining power by hook or crook while the established opposition is clueless.
Terming the incident of granting parole to Dera Chief Gurmeet Singh as another evidence of collusion of the ruling party and opposition parties in the state, Rajeev Godara said that this episode has also highlighted the bankruptcy of the state’s politics. He also said that it’s beyond the capacity of these parties to raise people’s issues. Negating the politics of Jaat-vs-non-Jat, he said that Swaraj India’s campaign slogan will be “मिलके पैंतीस एक, बने छत्तीस एक”
Swaraj India’s National Secretary Avik Saha highlighted the party’s commitment towards women and youth saying that the party shall give tickets to women on at-least one third of the of the seats while a same number of seats would be  given to youth candidates. Shalini Malviya, member of party’s Presidium said that the Party’s doors are open for all social and political workers, especially for women and youth who have been working at the ground level in the state.
Swaraj India’s State Secretary, Shri Deepak Lamba said that the Election Commission has accepted the Party’s request for reservation of a special election symbol for the Haryana Vidhan Sabha Elections. It has alotted the symbol of “Whistle” to all its candidates. Ex-Secretary of Swaraj India, Paramjeet Singh announced that Swaraj India shall begin its election campaigning in July with a state wide tour.
Other members of the State Working Committee too were present on the occasion.
Facebook : *@SwarajHaryana*                      Twitter: *@SwarajIndia_HR*
To join Swaraj India, give a missed call on: *8448893011*
Issued by:
Media Cell
Swaraj India
(Mobile : 9417150798)