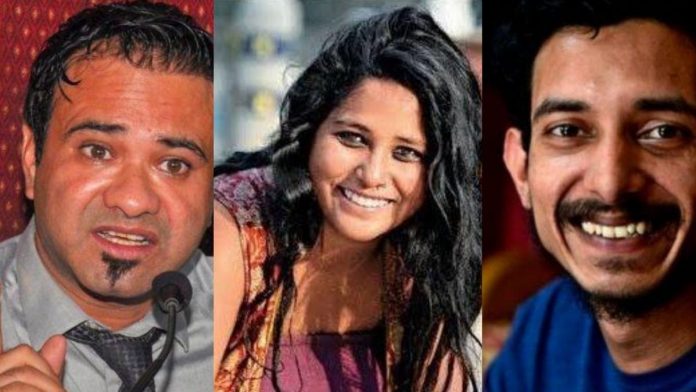 Hat Trick from the Courts,” tweeted human rights activist Teesta Setalvad on Tuesday. She was reacting to the three good news that came to anti-Citizenship Amendment Act activists in one day. First, the Allahabad High Court freed Dr Kafeel Khan of the dreaded National Security Act, held his continued detention to be illegal and ordered his release forthwith. Then, the Delhi High Court granted bail to Devangana Kalita, an activist of Pinjra Tod group, in one of the several cases she faces regarding the Delhi riots. Finally, the Aligarh Sessions Court granted bail to Sharjeel Usmani, an activist and former student of Aligarh Muslim University, involved in anti-CAA protests and arrested on charges of rioting. You might be tempted to read a pattern in this release of anti-CAA activists.

Nothing could be farther from the truth. These three sparks stood out because of the darkness that surrounds them. The fact is that all over India, anti-CAA protests are being treated as crimes, the protesters, especially Muslim agitators, are being hounded, and the rule of law thrown to the winds. This cannot just cause long-term damage to the culture of democratic protest but also leave wounds that are hard to heal.

A speech I heard

I had a personal glimpse into this perverse criminalisation. On 12 December last year, Dr Kafeel and I travelled together from Delhi to the Aligarh Muslim University (AMU) where the students had invited us to speak about the Citizenship Amendment Bill (it was not an Act yet; Rajya Sabha was to debate and pass the bill that very day). It was an electrifying meeting, just inside the university’s main gate. All I remember about my own speech is the dramatic entry, bang in the middle of my speech, of a group of women students, who had broken their hostel locks to come out and attend this meeting!

Dr Kafeel’s speech was no copy-book oratory, but there was something in it that touched the audience. His affirmation of nationalism and repeated appeal to Hindu-Muslim unity made me wonder why a Muslim speaker must prove his nationalism and secularism every time. But he was quite effective in conveying what was wrong in the proposed citizenship law. What stood out for me that evening was the dinner at a local dhaba in the midst of a sudden downpour and sharp, unresolved arguments on Jinnah with a very bright and articulate man and woman, both students of AMU. The man, I learnt later, was Sharjeel Usmani.

A few days later, I discovered that the Uttar Pradesh Police had registered an FIR against Dr Kafeel Khan for inciting violence and fomenting “enmity between communities”. The UP Police would soon arrest him in Mumbai under the National Security Act (NSA). All for a speech that I thought was a little over the top in affirming nationalism and reiterating Hindu-Muslim unity! Now, after seven months, after umpteen adjournments and untold harassment to his family, the Allahabad High Court has finally said what was obvious: that there was nothing objectionable about his speech, and that his continued incarceration under NSA was illegal.

If you look at what is happening in Uttar Pradesh, Dr Kafeel was lucky to have gotten this verdict.

Sarwan Ram Darapuri, another prominent anti-CAA activist and a retired inspector general of UP Police, is being threatened that his house and property will be auctioned to pay damages for the anti-CAA protests. The issue here is not just the humanitarian angle. The real worry is much bigger: would you be left with any faith in rule of law after going through what Dr Kafeel and retired IPS officer Darapuri have gone through?

Now shift your gaze to Assam and take a look at what is happening to Akhil Gogoi, the charismatic anti-corruption crusader of the state. I have known him for nearly a decade, but cannot quite place him ideologically. If you speak to him about the National Population Register, he could sound like an Assamese nationalist, but turn to political economy and you could hear a Marxist, just before you discover his Gandhian and ecological self. His organisation, Krishak Mukti Sangram Samiti (KMSS), was at the forefront of the opposition to the CAA even before the 2019 Lok Sabha election. As soon as Assam erupted in opposition to the CAA in December, Akhil Gogoi was arrested with three colleagues under the draconian and amended Unlawful Assembly Prevention Act (UAPA). The only proof of his terror link given by the NIA (13/2019) was that he met some Maoists, a decade ago, in 2008! When I went to meet him in Guwahati jail, he told me, “They won’t let me come out before the Assam elections in 2021”. It is has been nearly nine months since he was arrested, but Akhil and his colleagues are still struggling to file an appeal in the High Court against the rejection of their bail application. Just ask yourself: What would be your advice to anyone who plans a peaceful protest, after finding out the fate of Akhil Gogoi?

The real theatre of criminalising democratic dissent is the national capital itself. In July, 72 eminent persons, mostly retired IAS officers, wrote to the President of India seeking a commission of inquiry into the manner of investigation of communal violence in north-east Delhi. They pointed out that nearly six months into the investigations, the Delhi Police was yet to so much as question the leading lights of the ruling party — Anurag Thakur, Parvesh Verma, and Kapil Mishra — who openly gave provocative speeches on the streets of the capital prior to the riots. They expressed concern that despite widespread reporting, video evidence and formal allegations of the active complicity and partisanship of Delhi Police personnel in these riots, there has been no action or even an inquiry into this aspect.

The Police told the Delhi High Court in July that Kapil Mishra and other BJP leaders had no role in instigating the riots.

All this reminds us of the whitewashing of the 1984 massacre. But in one respect this is worse than 1984. Instead of just shielding the guilty, the police are actively going after the anti-CAA protesters. The police are desperately trying to gather evidence to support a grand ‘conspiracy’ theory that was already announced by Home Minister Amit Shah on the floor of Parliament prior to any investigation. While you cannot be sure of how the courts will react, you can take a guess at the reaction of the thousands of protesters, mostly Muslim women, who came out in public for the first time holding the tricolour, singing patriotic songs, reading the preamble to the Constitution.

That is the real tragedy. The hat-trick on Tuesday ends up highlighting what is an ongoing triple whammy for India. One, immunity for the powerful and targeting of the innocent erode peoples’ confidence in whatever remains of rule of law. It delegitimises the system of criminal justice. Two, criminalisation of peaceful protest is one of the surest ways of choking democracy. Dissent is the safety valve of the system and preventing it tends to push all the legitimate differences away from the constitutional and peaceful path. Three, targeting a beleaguered minority like the Muslims in today’s India with vindictive criminalisation of dissent could cause irreversible damage to the delicate task of nation-building.