Can India actually afford MSP for farmers? It’s a question of political will

Can India actually afford MSP for farmers? It’s a question of political will 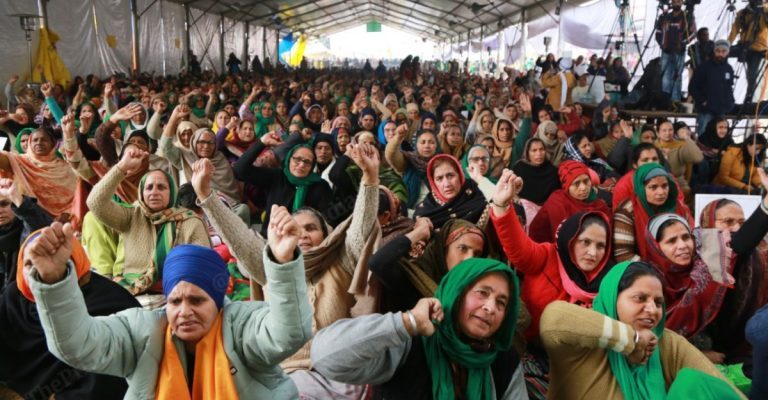 Can the farmers of India be offered a guaranteed remunerative price for their produce? The Narendra Modi government, some economists, and the country’s media would have you believe that this is impossible — both logistically and financially. They are wrong. They either do not understand what the farmers demand. Or they have not calculated the costs. Or they mislead, deliberately. If there is one moment to bust this myth, it is now, when lakhs of farmers are preparing to march to the capital on Republic Day.

Fortunately, we don’t have to start from scratch. The Modi government declares a minimum support price (MSP) for 23 crops every year. So, in principle, the government of India does recognise that the farmers need and deserve a minimum price for their produce. It has a mechanism, however faulty and disputed, for computing and announcing this price. And it acknowledges, though not in legal terms, its responsibility to “support” the farmers in terms of their price.

The problem is that it does not do much to actually offer this support. In reality, less than one-fifth of farmers get this support, because the government steps in only for two or three crops, and that too in a few regions. For most farmers, this minimum support price remains a maximum securable price, almost a dream price. In the current season, the MSP of maize is Rs 1,850 per quintal, but farmers had to sell it in the past three months between Rs 1,100 and Rs 1,350. Bajra fetched an average price of Rs 1,340 this January in Rajasthan, its largest producer, against the official MSP of Rs 2,150. Growers of pulses like urad, moong, and tur face a similar situation. The farmers want and demand the Modi government to ensure that they get what the government itself admits to be the minimum. They demand a law that would place an obligation on the government to make necessary interventions to ensure MSP.

Is this possible? Let us first get rid of a faulty notion of what such support might mean. Guaranteed, MSP doesn’t mean that the government should purchase every quintal of every crop. That would be impossible, unaffordable, and unnecessary. Government procurement at MSP can and should be expanded beyond current levels, but it is only one of several mechanisms that can be used to support the farmers.

Procurement for the public distribution system should be expanded to include millets, pulses, and oilseeds. That would also help meet the nutrition needs of crores of families. Providing 1kg of pulses to each of the 750 million PDS beneficiaries would generate a demand for about 13 million tonnes of pulse crops, giving a boost to pulse production that currently stands at about 23 million tonnes.

The second mechanism could be a robust and timely market intervention whenever the market prices fall below MSP. This would mean expanding the operations of existing agencies like MARKFED and NAFED with better funding, storage and marketing capacities. They need to purchase only a part of the crop, say 10-20 per cent, and this would shore up the prices for the farmers in the rest of the market too. Such a scheme does exist, but its funds need a quantum jump.

If this fails, the government can use a third mechanism by way of deficit payment. The government can compensate the farmers for the difference between the MSP and the price they actually secured. This was tried in Madhya Pradesh, as the Bhavantar Bhugtan Yojana (BBY), but the experiment failed due to its poor design. It should be designed afresh, with sufficient funds allocated for this purpose.

The fourth, and the last resort, mechanism is to make it illegal to trade below MSP. This is not a silver bullet solution and can boomerang if not supported by the first three. Used sparingly, penal provisions for violators would act as a deterrent to ensure that the market officials implement the provisions.

A prudent mix of these four methods can indeed ensure that no farmer receives a price lower than the official minimum support price.

Finally, is this affordable? Government spokespersons have pooh-poohed this demand by claiming that it would cost Rs 17 lakh crore, more than half the union budget. This is a mischievous figure. This is what it would cost the government if the entire produce of all crops is purchased by the government at MSP, and then destroyed or dumped in the Indian ocean! This calculation assigns zero value to the purchased crop.

To get a realistic estimate, we have calculated the difference between the MSP and the average actual market price of the crop. This is what it would cost the central government if it procures the crops at higher than market price, or makes deficit payment to the farmers. The table here uses the official data for 2017-18. The average market price is derived from the average (modal) daily prices in markets across the country reported by Agmarknet during the entire season, weighting the modal prices with the quantum of sales for each day.

The table gives the data for 13 major crops out of the 23 crops for which MSP is declared. For instance, the MSP of maize that year was Rs 1,425 but the weighted average market price was only Rs 1,159. Using the estimated marketed surplus production that year of 25.29 million tonnes, the total price deficit suffered by the maize farmers is calculated to be Rs 6,727 crore. In 10 out of the 13 crops, the average market price is significantly lower than the MSP.

So, if the government were to bear the entire cost of the price deficit suffered by the farmers for these 13 crops in 2017-18, the bill comes to Rs 47,764 crore. If you add the remaining 10 minor crops, the bill would have been about Rs 50,000 crore. This is smaller than the MGNREGA budget of that year. The actual government expenditure would be smaller, because market intervention and legal provisions would raise market price and reduce the amount to be paid by the government.

Table: How much would MSP guarantee cost the government? 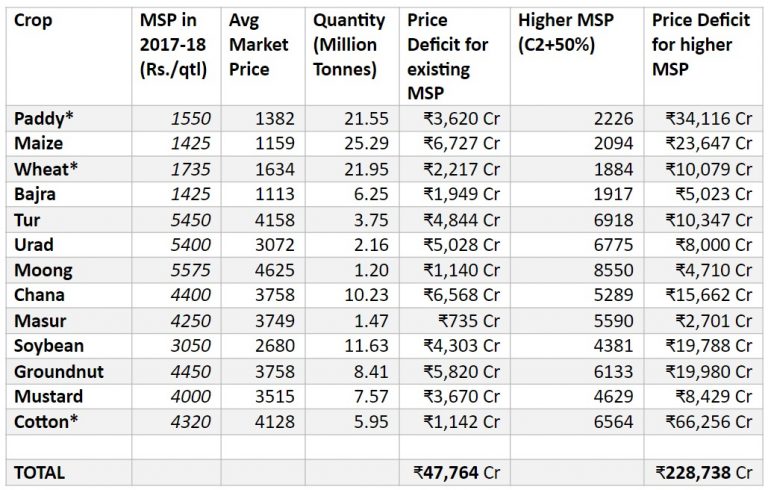 * In paddy, wheat and cotton, the market price was at or above MSP for about 80% of the crop, so we calculated the price deficit for the rest of the crop which was sold below MSP.

The table also presents a higher cost if the government raises MSP itself at 50 per cent above the Comprehensive Cost, as recommended by the MS Swaminathan Commission. In that case the maximum cost to the government would have gone up to Rs 228,000 crore. That is about 1.3 per cent of the GDP, and about 8 per cent of the union budget. This is stiff, but not impossible. The cost could be shared between the central and the state governments.

Can India afford this? Well, it depends on what you think this country is, and what is the worth of annadata. This is a question of political will. This is the question crores of farmers are asking today.

Kiran Vissa is a farmer activist with Rythu Swarajya Vedika and member of the working group of All India Kisan Sangharsh Coordination Committee.