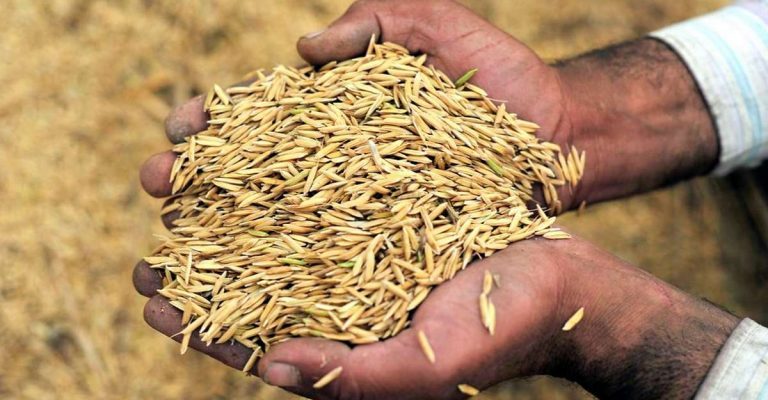 Ballari is famous, or infamous, for many things – Ballari brothers, mining scams, the Sonia Gandhi vs Sushma Swaraj election – but its agricultural produce market is not one of them. Located on prime land in the district headquarter, this mandi is no different from mandis all over Karnataka. Its size, infrastructure, system of auction, and record-keeping is better than most other states of India, except Punjab, Haryana, and some parts of Maharashtra. Like most states in the South, Karnataka enjoys better governance than most states in the north or the east. Besides, Karnataka was the first state to have its own Agricultural Price Commission.

So, this is not a bad place to test Prime Minister Narendra Modi’s grand promise: “MSP tha, hai aur rahega”. [Past, present or future – minimum support price is for real]. I visited this Mandi on 6 March to kick off the Samyukt Kisan Morcha’s ‘MSP Dilao’ (Get me MSP) campaign. There was a good reason to begin with Karnataka. Harvesting and crop arrivals start 2-3 weeks earlier in the state than the rest of the country. Besides, there is little room for a centre-state blame game, since the same party rules at both the levels.

A look at ground reality

Mandi officials were prompt to hand us a printout of the price at which various agricultural commodities were sold (“tendered” in the mandi parlance) by the farmers that day. Eight of the 11 commodities traded on 6 March were from the list of 23 crops that enjoy MSP. Of those eight, only one – urad or black gram – was sold at or above the MSP. Make it two out of nine, since we were told sunflower seed was also sold above the MSP but was somehow missing from the official list. The remaining seven crops were sold below what the government of India officially assures the farmers to be the minimum price that the farmers must get and the government will support the farmers to secure. This included all the five major crops of that area: tur, makka, jowar, chana and bajra. This is what the price table looked like in Ballari on 6 March: 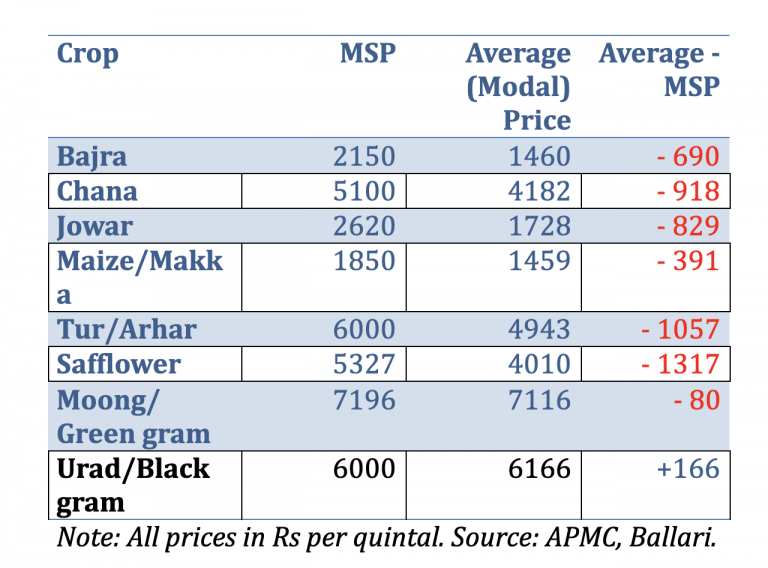 If you think Ballari might be an exception, it is not. More or less the same prices were found all over Karnataka markets for most crops. The average February price for bajra and maize was actually lower in the rest of the state than in Ballari. Only tur fetched a better price elsewhere. If you think this year is an exception, it is not. An average of the last three years (2017-18 to 2019-20) by the Karnataka Agricultural Price Commission shows that as much as 72 per cent of the agricultural produce in the state sells below the MSP. T N Prakash Kammardi, former chairperson of Karnataka Agricultural Price Commission, estimates that farmers of Karnataka lost Rs 3,119 crores last year due to distress sale below MSP.

What about the rest of the country? For an answer, I turned to my friend Sunil Tambe who has tracked agri markets for well over a decade. He mined Agmarknet, the official website that reports prices for each mandi on a daily basis and reached conclusions even more depressing than the picture gathered from Karnataka.

None of the major kharif (summer) crops, except paddy, fetched anything close to the assured minimum. If paddy did better, it was solely due to the government procurement in many states. Fine varieties of long-grain paddy, which are not covered by MSP, suffered badly and were sold at less than the MSP for ordinary PR variety. No state other than Haryana, not even Gujarat, procured bajra at the MSP. As a result, Bajra sold around Rs 1,300 against the official MSP of Rs 2,150. During the peak arrivals in the month of November, moong was sold for an average price of Rs 5,556, about Rs 1,600 below the official MSP.

The marketing season for rabi has just begun, but the signs don’t look good. Wheat, the biggest crop of the season, is yet to be harvested. As in the case of paddy, it may get a decent price wherever the state procurement takes place. In other mandis, farmers could suffer a loss of Rs 300 to 500 below the official MSP of Rs 1,975. Mustard could be another exception, for the initial trends suggest that its market rate is hovering between Rs 200-300 above the MSP of Rs 4,625.

For all other crops, the MSP is the ‘maximum aspirational price’. Ragi season is nearly over and it has sold around a thousand rupees lower than the MSP of 3,295. Maize grown in winter is already in and is again selling between Rs 1,300 to Rs 1400, much below the MSP of Rs 1850. Barley is trickling in and the initial trend from Rajasthan shows it is selling around Rs 1,300 against the MSP of Rs 1,600. Jowar has also started coming to the market and the hybrid variety is getting about Rs 1,000 lower than the MSP of Rs 2,620. Chana or Bengal gram, the other big crop of the current season, is currently selling between Rs 4,400 and 4,800. That translates into a loss of Rs 300 to 700 per quintal, since the MSP is Rs 5,100.

My apologies for making you go through these painful details. But there is no other way of demonstrating that MSP is a fraud imposed on farmers, what is called “minimum” price is for all practical purposes a dream price, and that the “support” promised in the support price never arrives. There is no other way to explain why farmers do not believe paper assurances, and why they want nothing short of a legal guarantee of MSP.

To be sure, the situation was no better under previous governments. For the last five decades, MSP has always been a piece of paper for most farmers. The only difference is that we now have a Prime Minister who has the gumption to say: “MSP tha, hai, or rahega!”

You must be joking, Mr Prime Minister.