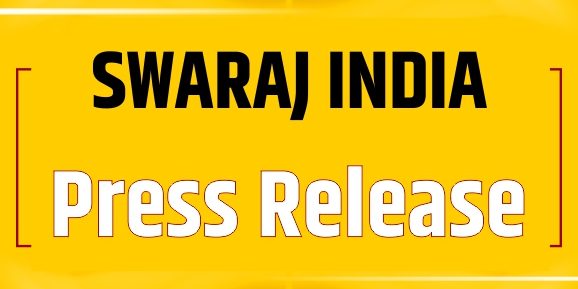 – India Cannot Allow Bhopal to be Repeated. The Governments Representing People Should have Acted with Alacrity. They Didn’t. Glad That AP High Court is Moving in the Right Direction – Prof. Ajit Jha, Working President, Swaraj India

Delhi, 24th May, 2020: Swaraj India welcomes the interim order passed by Chief Justice JK Maheshwari and Justice Lalitha Kanneganti of the Hon’ble Andhra Pradesh High Court, giving a slew of directions to the Central & State Government including ordering the State Government to seize the premises of LG Polymers chemical plant at Visakhapatnam, from where leakage of poisonous styrene chemical gas occurred in the early hours of May 7 over a 5-km radius of its vicinity, affecting around 2,000 locals of five villages and leaving a dozen persons dead and hundreds injured.

In a scathing indictment of the cover-up operations being done by the Central and State Government, the Hon’ble Court further directed that:

– If a Committee, duly appointed, wants to inspect the premises, they shall be at liberty to do so. However, they shall put a note on the Register maintained at the gate of the Company regarding the said inspection and while returning, a note regarding the the act done on the premises should also be noted.

– None of the assets, movable or immovable, fixture, machinery and contents shall be allowed to be shifted without the leave of the Court

– The government should inform the Court whether any permission was obtained to restart the Company’s operations during the lockdown period. If not, an action taken report on this aspect should be filed

– Given the grievance that multiple Committees over the issue have been appointed (by the NGT, the Central Government and the State Government) the Government authorities may apprise the Court as to which Committee shall fulfil the purpose to answer all questions raised on the issue.

The Hon’ble Court also noted that the actions taken reports filed by the State and Central Government was silent on the following issues:

– LG Polymers has been operating without a valid Environmental Clearance from the Ministry of Ministry of Environment, Forest and Climate Change (MoEF&CC)

– The inhibitor concentration in the storage tank was not checked

– Refrigeration system was not working properly

– The radius of the vulnerable zone was extended upto 6.3 kilometre from the source

– There are several hospitals, educational institutions, places of worship, railway stations and airport within the vulnerable zone

– The bystander population should have been informed of the risk that they were in and trained in evacuation procedures in the event of an accident as per Manufacture Storage and Import of Hazardous Chemicals Rules 1989. But this has not been done

– The siren/alarm system did not function

The Hon’ble Court rightly asked the Government to explain why was the styrene monomer permitted to be transported to South Korea and who is the person responsible for the same, when no court permission was granted for the same and when no investigation/ nspection team was appointed and no magisterial enquiry was held, despite these being a requirement after the registration of a crime?

It may be kept in mind that LG Polymers is a South Korean company which has for long received protection from successive governments in India. The company has itself in an affidavit, submitted to the State Level Environment Impact Assessment Authority (SEIAA) on 10.05.2019, that it didn’t have any Environmental Clearance (EC) before setting up or expanding its petrochemical plant. Though this was in clear violation of the Environment Impact Assessment (EIA) notification of 2006, no action was taken against the company either by the State Government of Andhra Pradesh or the MoEF&CC. Even without any EC, this plant, situated in close proximity to residential and populated areas, was granted approvals to start and expand by the Andhra Pradesh Pollution Control Board (APPCB).

The frequent violations of the law were neglected and due care was not taken by the authorities to ensure compliance of environmental laws by the company.

Swaraj India hopes that this order would prove to be an example that violation of environmental laws is completely unacceptable and no one will be allowed to get away with such action.